Teachers risk piling the pressure on their pupils by simply asking them how they are feeling about their exams, the head of the school inspections body Ofsted has said.

Ofsted’s chief inspector, Amanda Spielman, said merely speaking about tests could subliminally cause a child anxiety. As thousands of youngsters across England and Wales began their Sats and GCSEs this week, Spielman said: “Good primary schools manage to run key stage tests often with children not even knowing that they’re being tested. Seven-year-olds [think] ‘oh we did a maths booklet today, great’.

“I was in a primary school not long ago where I saw something that did concern me, where the head was going around clapping the year 6 pupils on the shoulder saying, ‘So are you feeling OK about the test, is everything going well for you?’ And I thought actually maybe that is well-meaning, but maybe that’s actually subliminally encouraging children to feel anxious.” 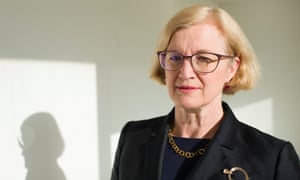 There is rising concern that a teach-to-the-test system is having a negative effect on the mental health of children. Asked whether positive encouragement from headteachers could affect the wellbeing of children, Spielman said everyone needed to think about their behaviour.

“The mere act of talking about something – somebody other than a classroom teacher talking about it – might just help to ratchet things up that bit,” she said.

Commenting on whether in an ideal world children would not know they were being tested, she said: “Clearly, testing happens in every system throughout the world. It only becomes a big deal for children if people make it so for them.”

Spielman was speaking before the launch of Ofsted’s new inspections framework, which will crack down on bad behaviour in classrooms, with schools being judged on the learning environment they provide for students. The behaviour judgment will assess whether schools are creating a calm, well-managed environment free from bullying.

From September, there will also be a greater focus on what is being taught through the curriculum, rather than an over-reliance on performance data.

The changes follow a three-month public consultation, which prompted more than 15,000 responses.

Fifth of teachers plan to leave profession within two years

Inside the School Where Every Student Gets Their Own Teacher